Mac Developments began in the pneumatic/hydraulic industry in 1969. Their cutting edge products and high quality products were used by NASA , US and Australian Defense Forces and various hospitals, research labs and pharmaceutical companies.

In the mid 90's Macdev has turned it's attention to Paintball. Utilizing their experience and history of high quality manufacturing measured to some of the most stringent standards in the world (NASA and US Military), they created their first Sonic Autococker in the late 90's. 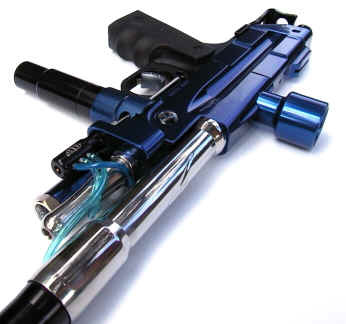 Features of the original Sonic Autococker:

The next generation marker was the 2k1 model Sonic Autococker. With a long list of MacDev Sonic upgrades, it represented the ultimate performance Autococker available. The standard features are listed below with a few exceptions. The chrome STO 3-way was replaced mid way through the production with an ANS 3-way which gave better performance with the WGP hinge trigger. A 15 degree ASA was also available as an option as this feature began to become poplular. The Sonic Cocker could also be ordered with a full matching CP barrel kit and a matching Conquest Air System if desired. MacDev also offered a feature to it's customers that has never been offered since by any other manufacturer, a matching anodized aluminum ring for the owner of the Sonic Cocker. The 2k1 Sonic Cocker sold for $1100 and was available in the following colors: Black, MacDev Red, Forest Green, Burnt Orange, Electric Blue, Aqua, and Steel Grey.

Features of the Sonic 2k1 Autococker:

The 03 Sonic Cocker represented the highest quality ever brought to a custom cocker before. Frustrated with the quality control issues associated with the stock WGP raw autococker bodies, MacDev milled their own bodies for the 03 production year. This allowed them to match the high tolerances of their internal upgrades with a perfectly matched cocker body. The prices had dropped to $900 and represented the end of an era as custom cocker manufacturers closed down or moved onto electronic markers. The 03 Sonic Cocker was available in Blue/Silver, Silver/Orange and Black/Red fades.

Features of the 03 Sonic Cocker include: